Insead, one of the most prestigious and largest business schools in the world, is home to students from all over the world studying at its two campuses in Singapore and Fontainebleau. Its cultural diversity has also contributed to an increase in students from diverse backgrounds enrolling at Insead each year. Every year, every batch features students from more than 100 countries in the world. With a global group of teachers and students, studying at Insead is genuinely a one-of-its-kind experience. Students look forward to spending their time at Insead, which boasts of one of the best business school campuses, both in Singapore and Fontainebleau. 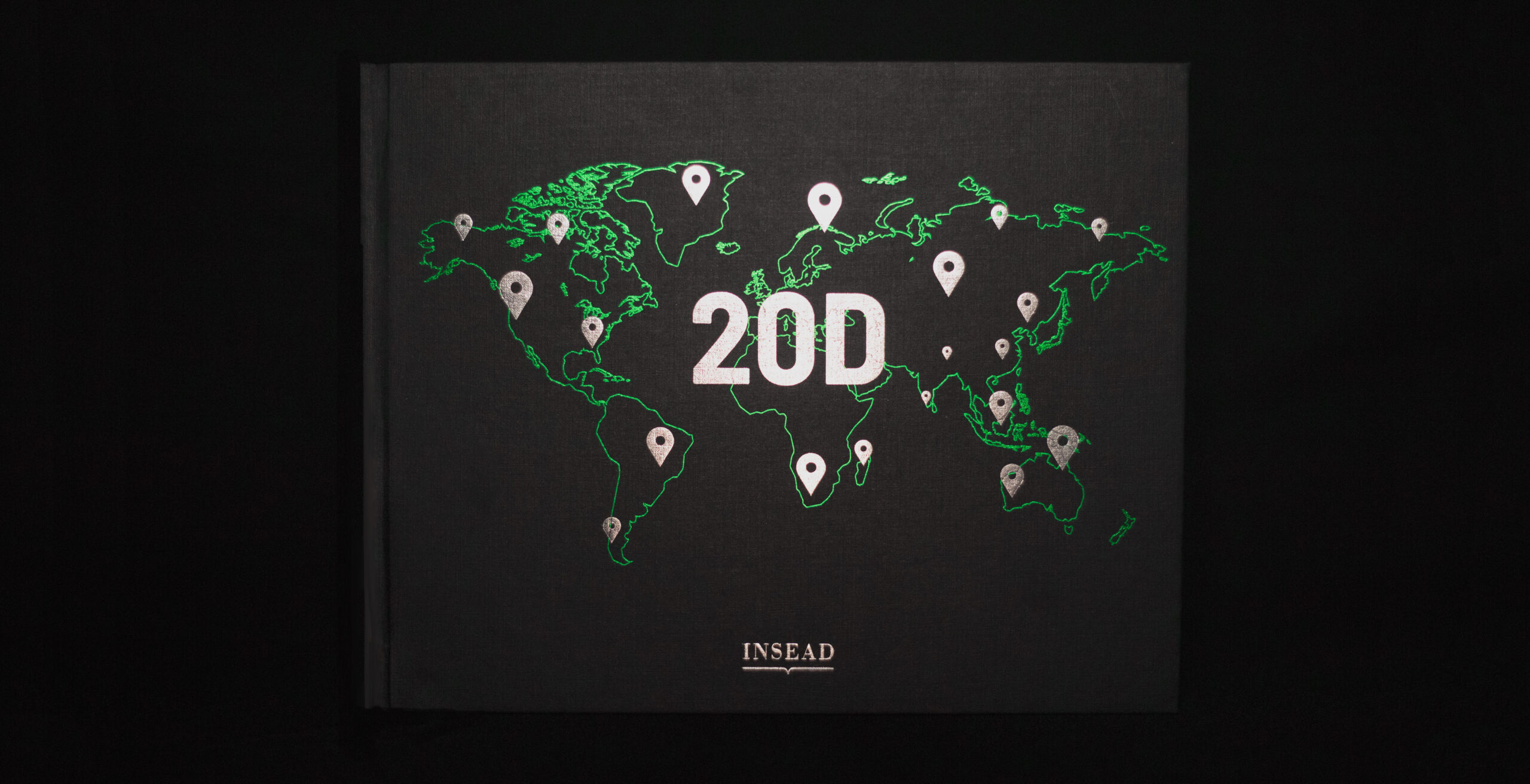 However, fate had other plans for batch 20D, the students of 2020-21. As the world began to comprehend the consequences of the coronavirus pandemic, classes were moved from physical environments to online confines. For the professors and students alike, this was completely new territory. But they did not let this affect them, as they continued to make this new experience worthwhile. Scores of zoom classes, meetings, virtual friendships, and online submissions later, the batch of 20D finally graduated.

A yearbook is a treasure chest of all the good memories a college student has made. Graduation represents the end of an era, and a yearbook commemorates students’ memories and accomplishments during their college years.

We wanted to make the yearbook for the class of 2020-21 more meaningful and memorable than the previous two yearbooks we had done. “Why this project was particularly unique was the fact that the entire batch of Insead 20D studied virtually.” says Mehak Garg, Communication Designer at Designflyover. As a result, we felt that they deserved something exceptional. This was also largely in our mind when we chose the theme for this yearbook – Virtually Together.

To make the yearbook as memorable and engaging as possible for the students, we decided to incorporate various elements that were part of the daily class sessions and group communications. All throughout 2020, students connected with professors, and each other, through online platforms like Zoom, Google Meet, Telegram, Whatsapp, etc. Everything from teaching to networking happened online.

As a result, when it came to determining the visual language of the yearbook, “we chose these platforms as our sources of inspiration”, says Mehak. Various elements were incorporated into the yearbook’s format, each of which was intended to remind students of their very unique college experience. Chat boxes, windows, buttons, cursors, desktop icons, and, of course, the most popular of them all – video on and off buttons – all contributed to the yearbook’s visual language. “The reason for choosing this visual layout was to remind the students at any given point of time about the extremely unique and different college experience that they had.” 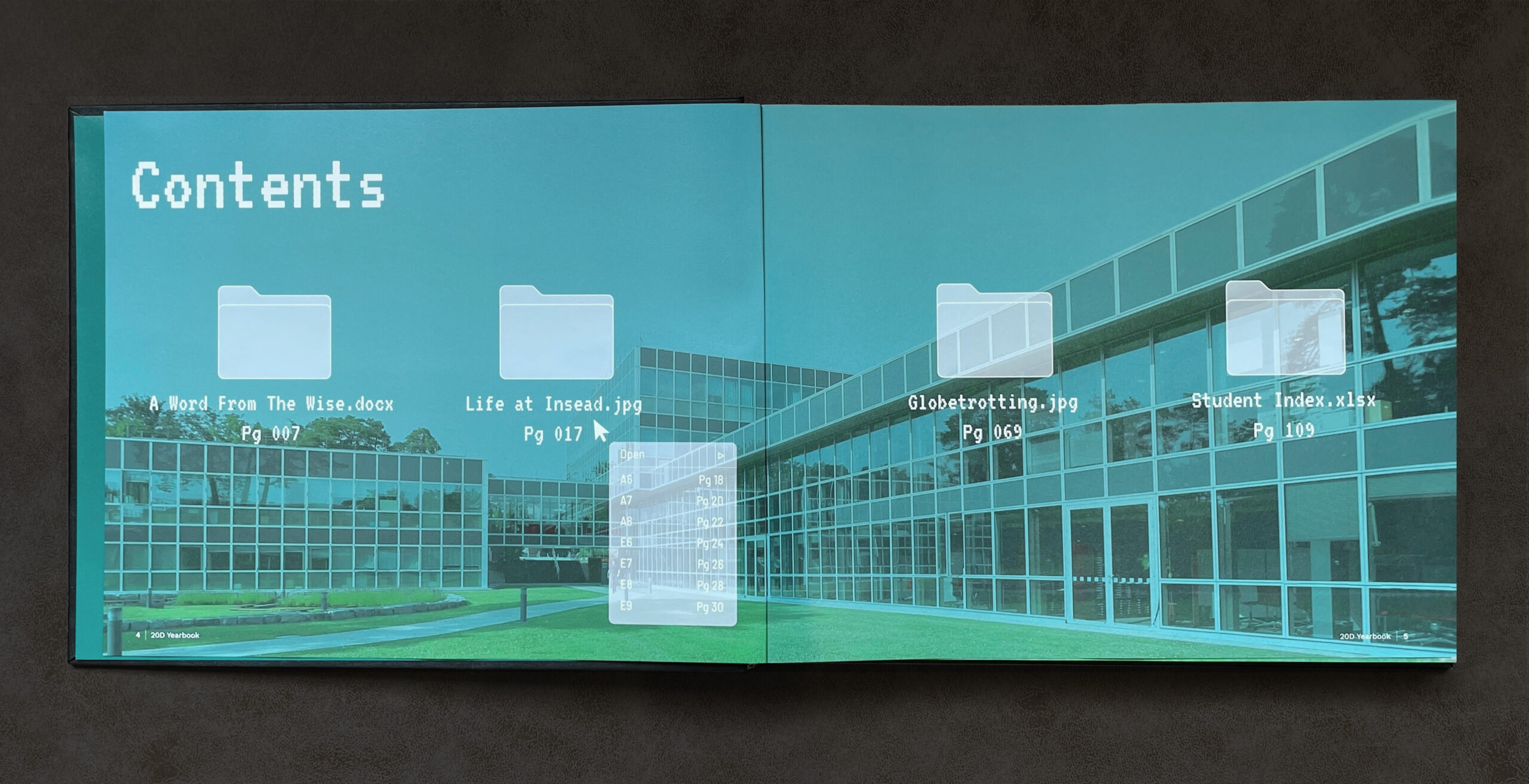 This visual language is found in various parts of the book. For instance, on the contents page, we used desktop icons to highlight the main sections of the yearbook. As for the fonts used in the book, we decided on two types. One was a primary font, which represented headings, highlights, etc., while the secondary font represented the rest of the standard text. The primary font very loudly reflected the digital space, and anyone could easily guess it with only a single glance.

A Word To The Wise

Whether penned down in a yearbook or not, students love hearing from their professors about their experience teaching them. We decided to incorporate these into the yearbook by dedicating a section called “A Word From The Wise,” which contained letters from each professor at Insead to batch 20D.

Adding pictures makes a yearbook all the more personal and unforgettable. We added a green blank screen with the video on/off icons for those professors who could not submit their photos on time, which essentially meant that their faces could not be seen. All of this was intended to emphasize how big a role technology played in this remarkable college experience students had. It also attempted to make the whole experience more relatable to the students.

As for the addition of award windows, it was an exciting concept that the Insead team came up with. In reality, Insead also awarded its students in various categories such as “class clown,” “best singer,” “most studious,” and so on, based on popular vote.

And we figured it would be a nice idea to include these in the yearbook to give the students a good laugh. Instead of dedicating a single section to these awards, we decided to spread the award windows through several sections, creating an element of surprise and fun for the students as they browsed through the yearbook. 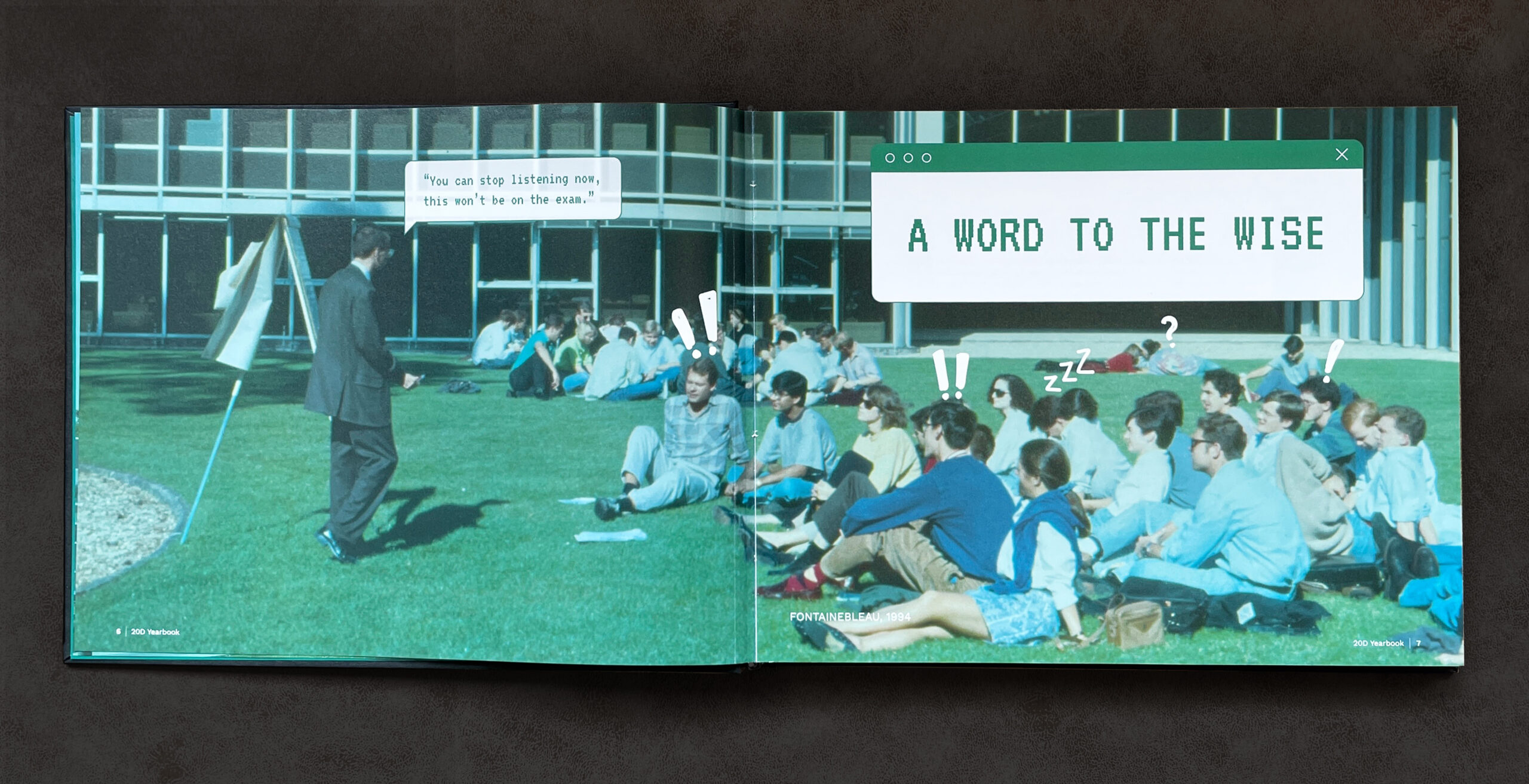 In the limited physical interactions that students had with one other, several pictures were taken to commemorate the moment, and we did not forget to add these pictures into the “Life at Insead” section. We added screenshots from their Zoom classes for students who could not come together physically, making sure that we didn’t leave anyone out. At the beginning of this section, we added a separator page with a pop-up window that read, “You’re about to experience extreme nostalgia,” showing how we were attempting to bring back all those good memories for the students. 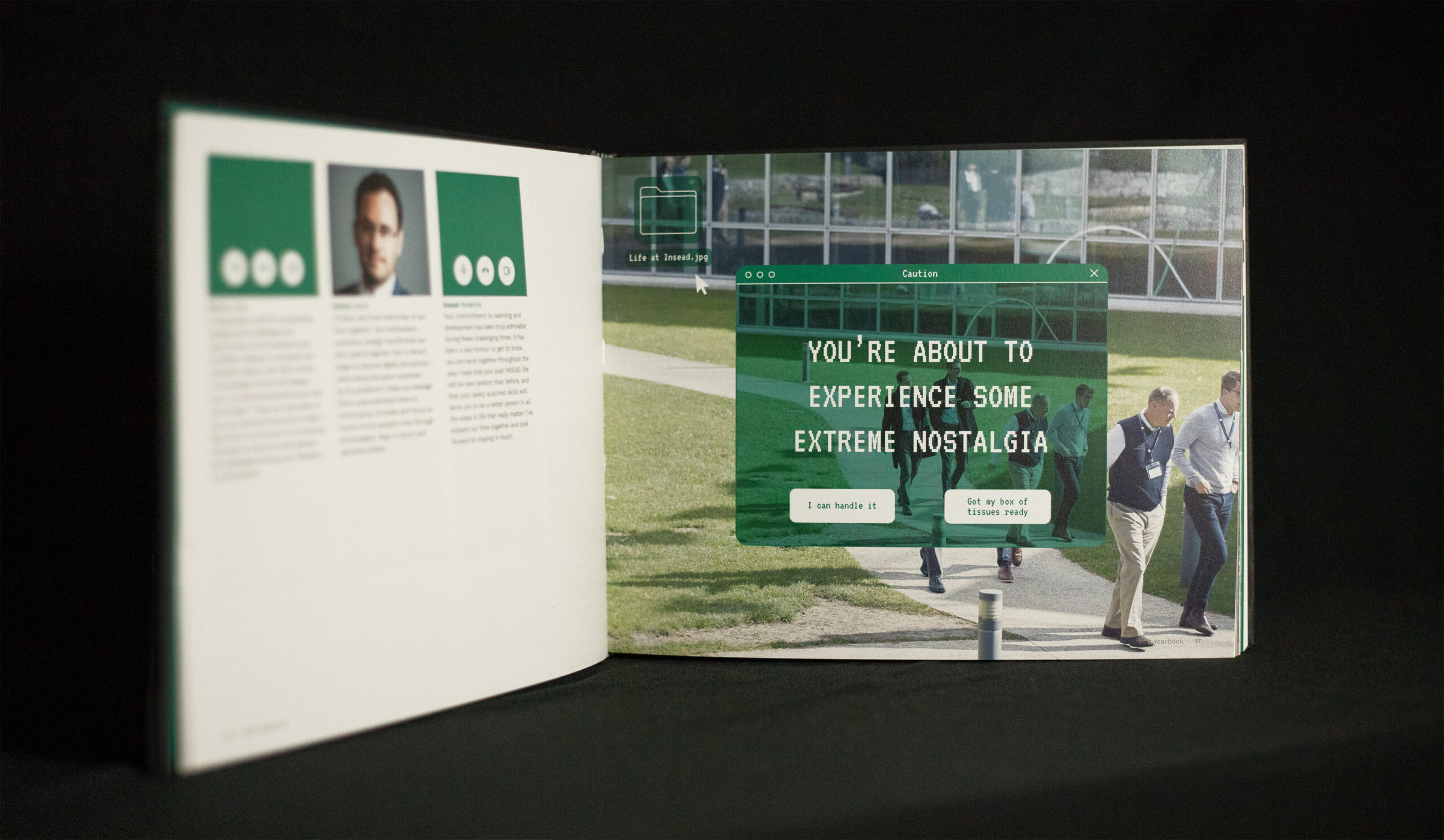 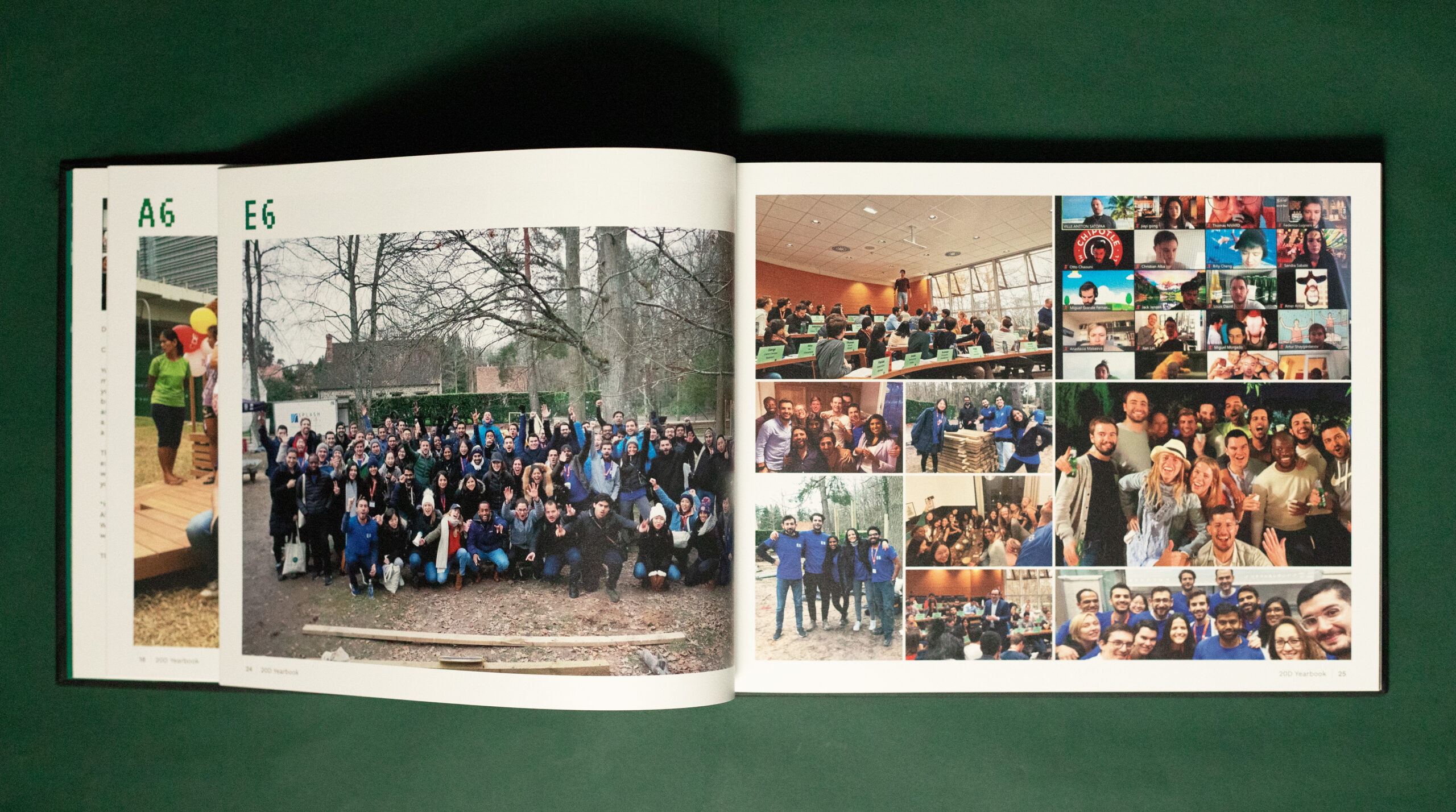 The “Globetrotting” section of the yearbook also featured pictures from the trips that students in various parts of the world had taken.

The Insead yearbook team gave us several valuable inputs, including quotes by professors and students, catchphrases, and of course, screenshots. Throughout the entire yearbook, we incorporated these individual elements subtly and humorously. These quotes and catchphrases were added in the form of chat bubbles to reflect their original mode of communication. 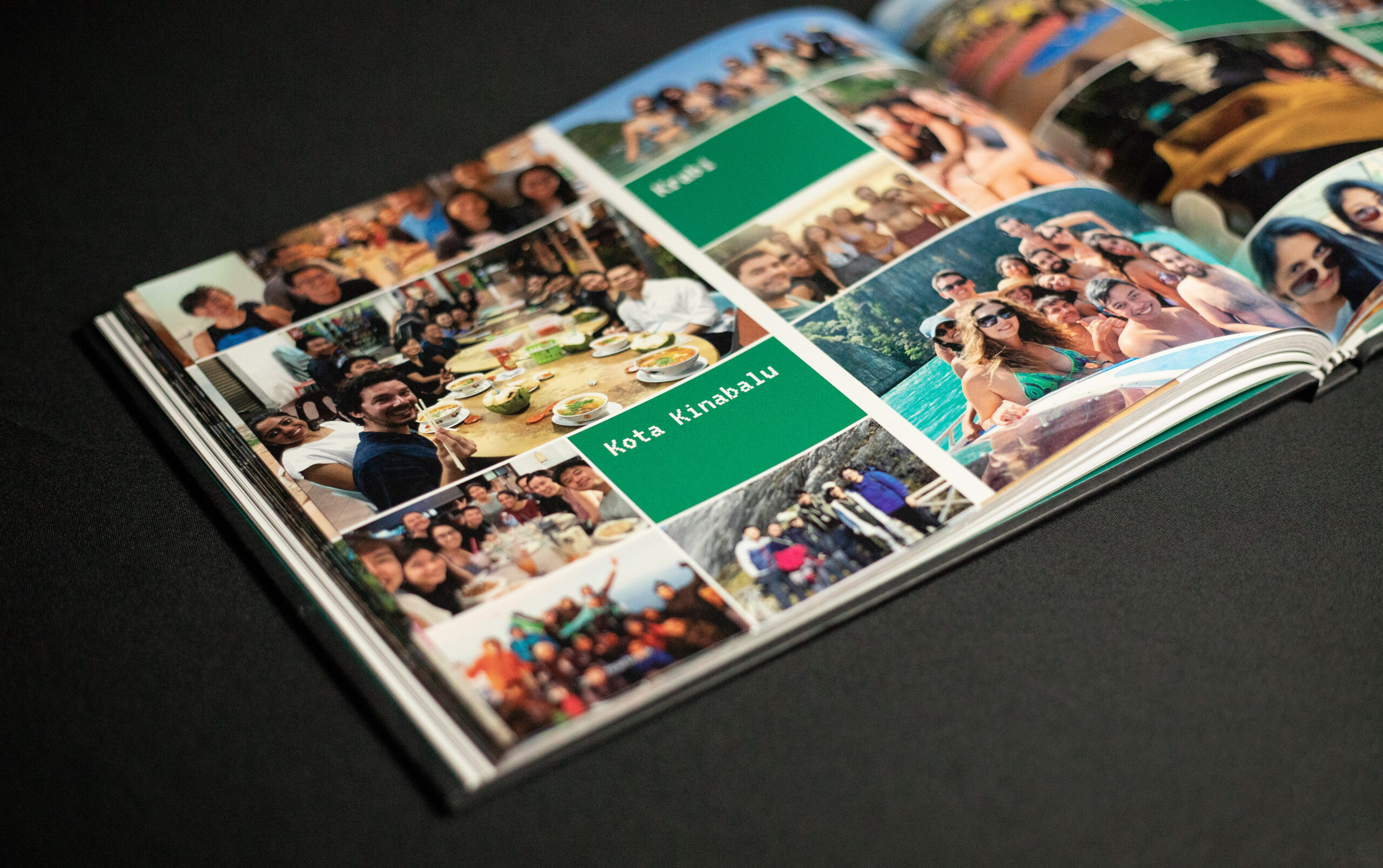 Towards the end of the yearbook was the most important section. In this section titled “Future of Business,” the names and photos of each student, along with their nationality, were listed. We decided to personalize the illustration for this section by including an image of a student wearing a suit on the top. At the same time, the bottom displayed pajamas, showing how the online experience had been essentially the same for all of them, including professors. The entire visual layout of the student index is in the form of a Zoom/Google meeting, with each screen containing the respective details of each student. 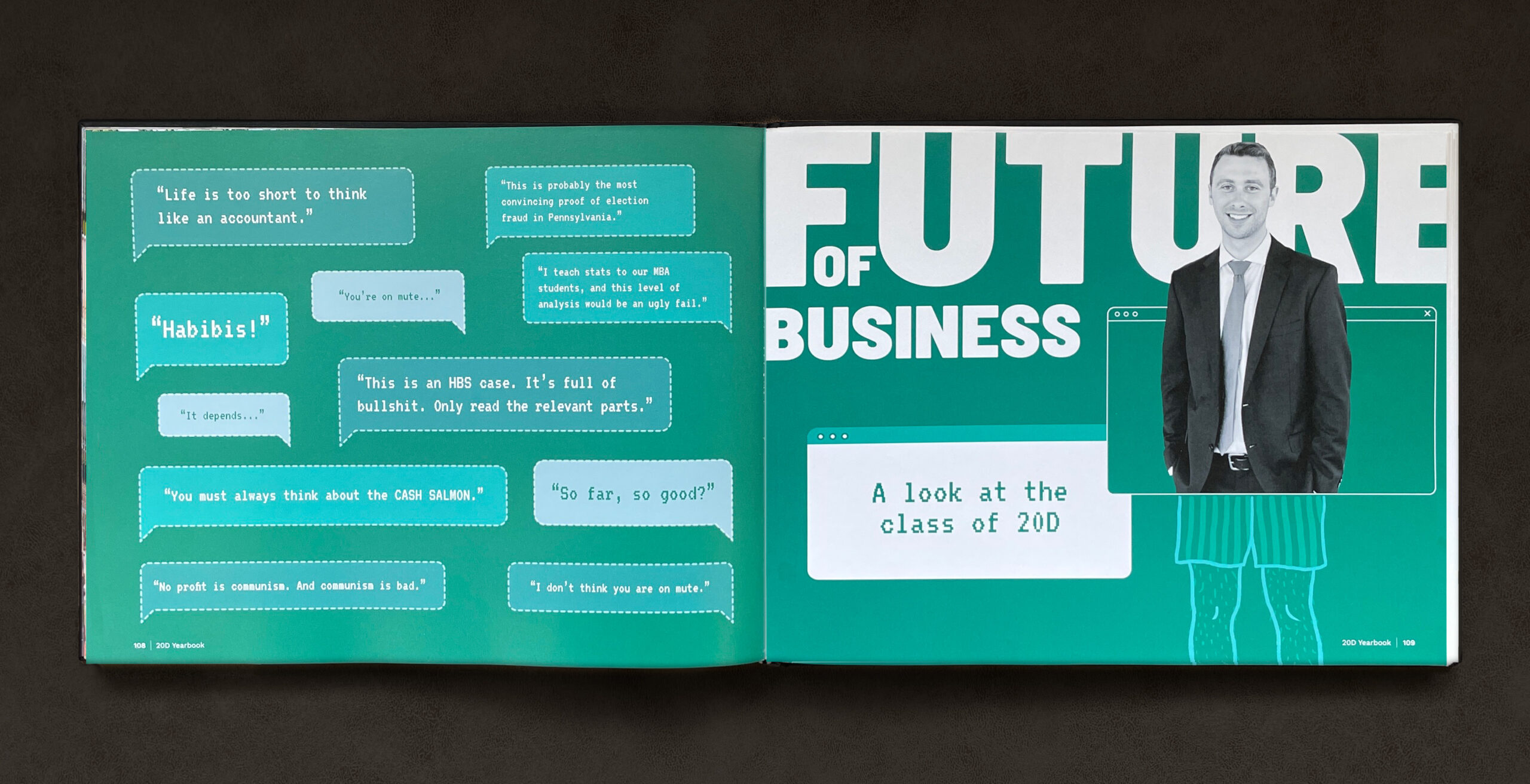 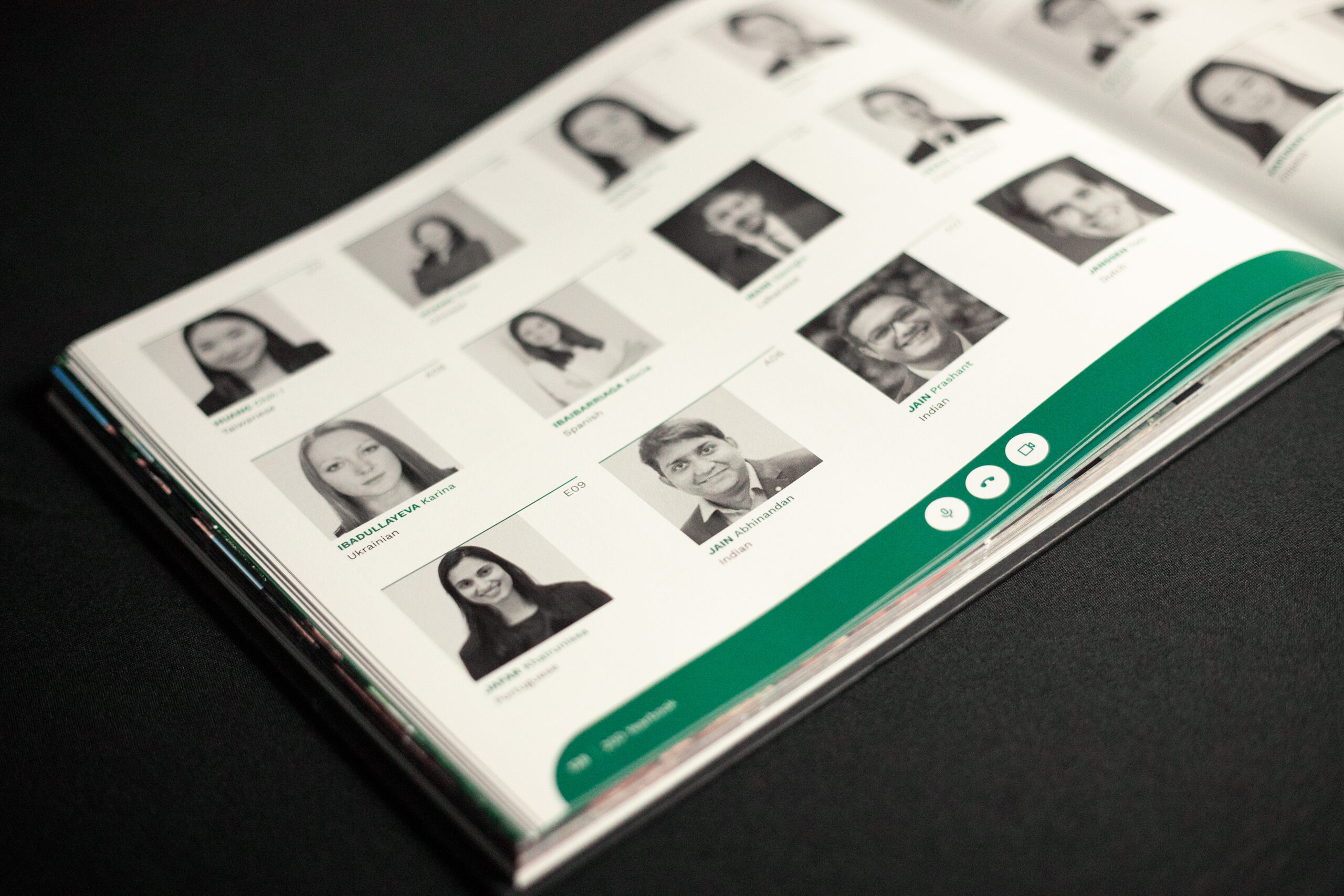 The last part of the yearbook included pictures from the virtual graduation, where professors were present, and the entire event was live-streamed for students across the globe to watch. Some students even shared Instagram and Whatsapp stories of the graduation ceremony. Screenshots of these, along with screenshots of students watching the ceremony, were also added to this section.

Finally, we concluded the yearbook with an acknowledgment of the Insead yearbook team, who provided us with plenty of valuable inputs that helped us make this yearbook as memorable and eventful as possible. 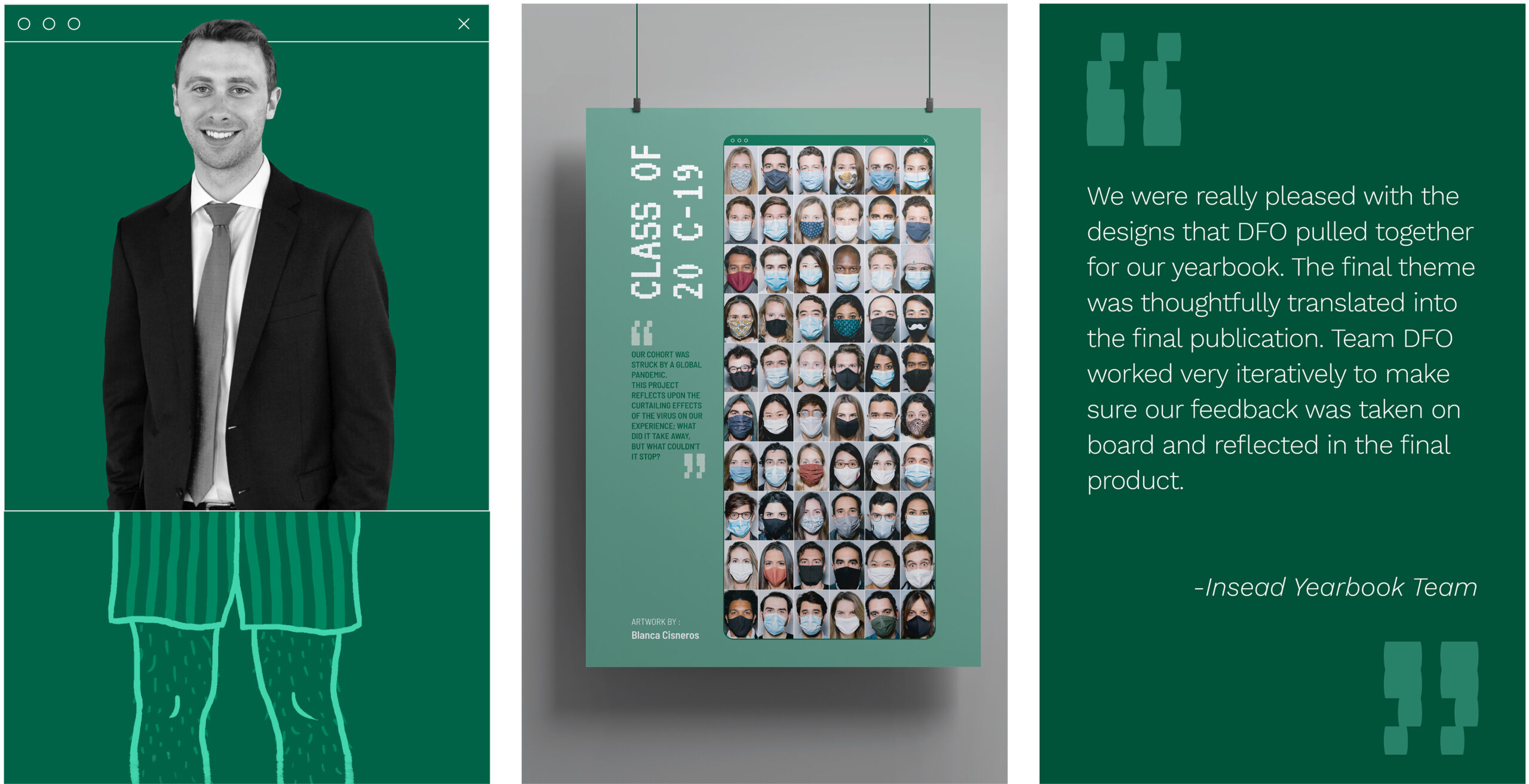